You are here: Home » Make a Snowpkin

Earlier I created a large pumpkin for a centerpiece using the “Harvest Sunsrise” kit from SVGCuts.  During the process I had an idea to use the same file but create a snowman using three pumpkins.  After three days and a bit of trial and error, here’s the finished project.  I simply love how it turned out! 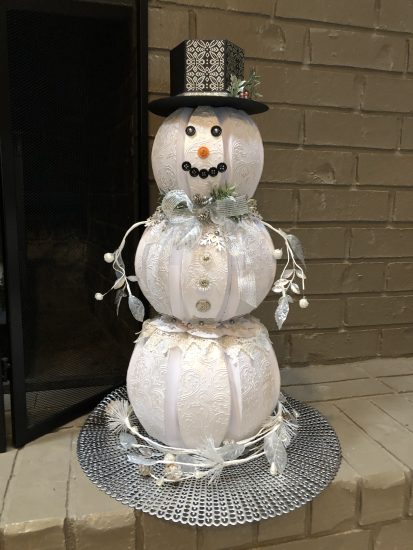 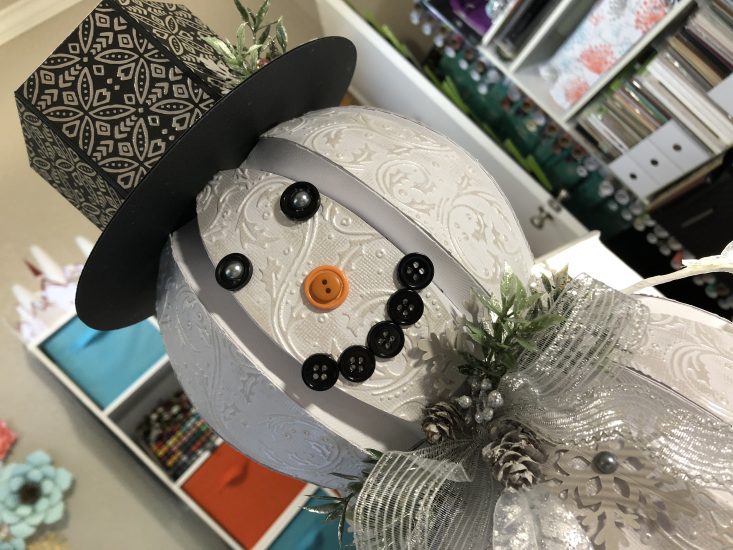 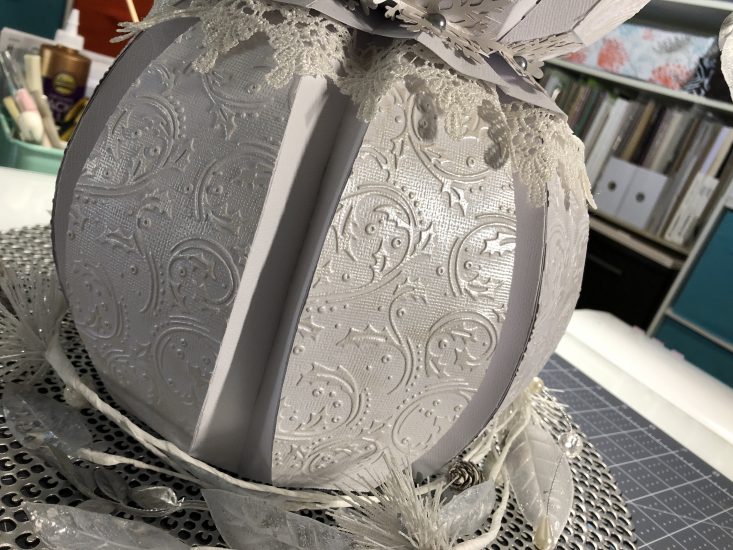 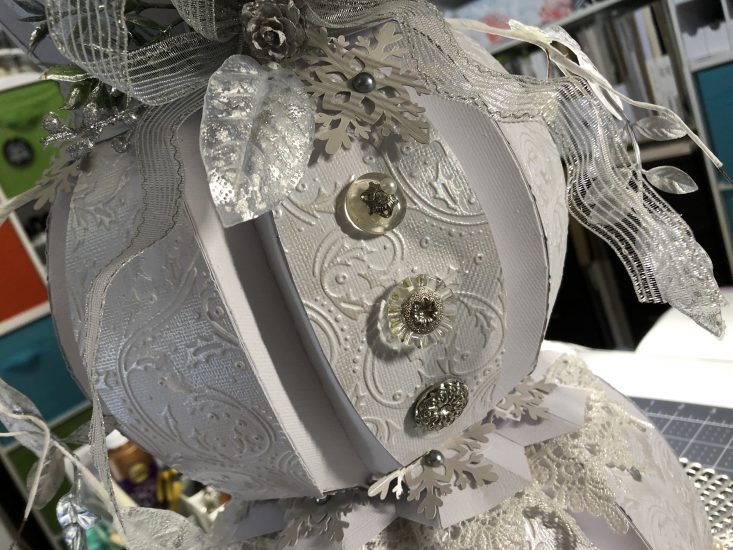 Create three versions of the pumpkin file naming them Large, Medium and Small.  Size each file by using the “Select All” option in design space – as follows. (Thanks to Angelique for helping me figure out the sizing!) . Just size the widths and let the height set itself based upon the width you enter.

Create all three pumpkins including the lids – you don’t need the stems. 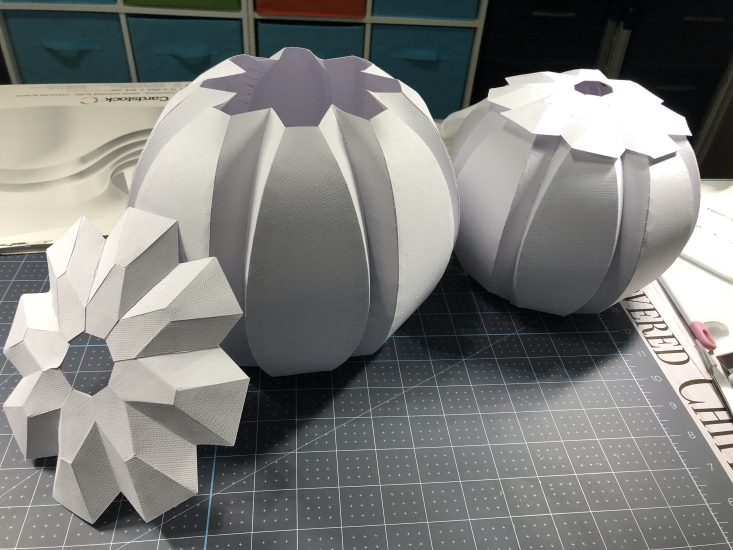 Stability was an issue I had to figure out because the pumpkins do not glue flat together.  Using the support base from the lamp post in SVG Cuts “Christmas Eve” bundle kit, I create cones to be placed inside each pumpkin.  Make each base just a tad taller than each finished pumpkin.  This will give you something to glue the lid part of the pumpkin to and also holds the weight of each additional pumpkin as you glue them all together.

Glue the cones inside each pumpkin with the smaller side at the bottom as seen below. 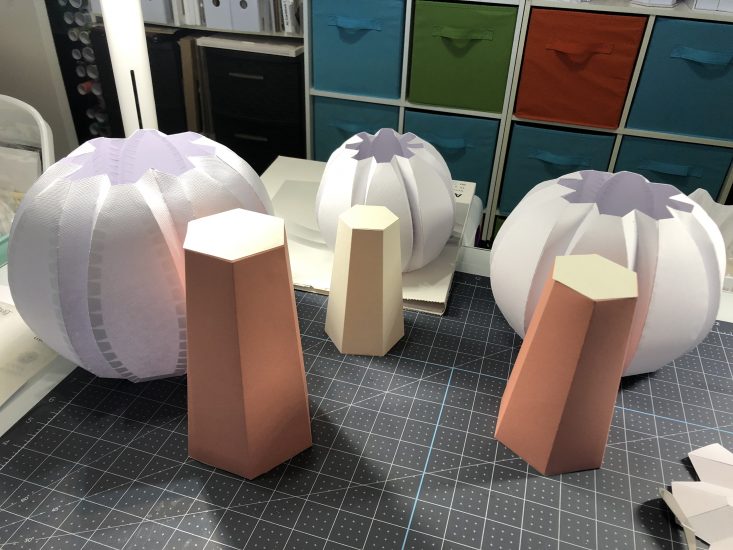 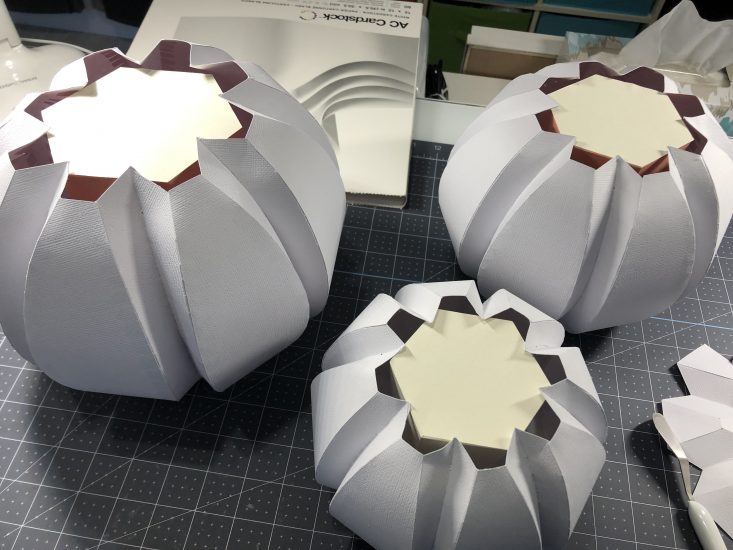 Once the glue has dried on the support cones, emboss all of the panels for each pumpkin and attach them with score tape or glue.  NOTE:  score tape works fine and will not warp the paper so you won’t alter the shapes.

Now glue the lids on the bottom (lrg) and middle (med) sizes pumpkins then glue these two together.  I found that there was still some wiggle to the pumpkins so I cut small half inch by one inch sized pieces of cardstock then folded them in half and glued them as seen below to further connect the two pumpkins.  Glue the top (small) pumpkin on and again use the little cardstock strips to make the pumpkin stable.  This will get covered up later as you will see. 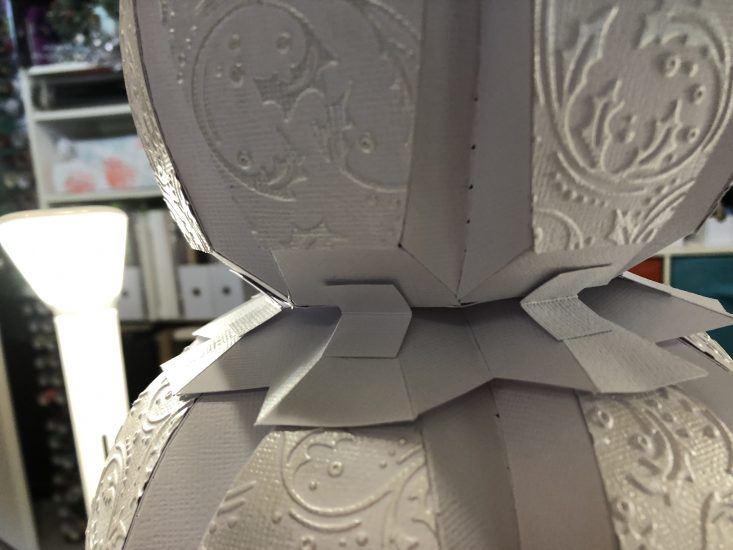 Now create a hat for the top and glue it into place.  I’ve used the “Stacking Snowman Boxes” project from Cricut Design Space for the hat.  You will need to resize it and create an additional circle to make the brim larger.

Use the “Select All” option in design space and size the top portion of the hat to:  width of 9.69.  The additional brim has a diameter of 6.872.  That should get you the correct sized hat.  Note that when you glue the hat on, there will be a slight gap between the hat brim and the pumpkin sides/points at the top.  You can hide these by creating rings in the same diameter as the hat brim, cut a circle area out of a circle shape so that it leaves a ring that is about 1.5″ thick.  Slit each ring then glue them to the bottom of the brim all the way around.  Add as many of these rings as needed to cover up that gap.  I used two. 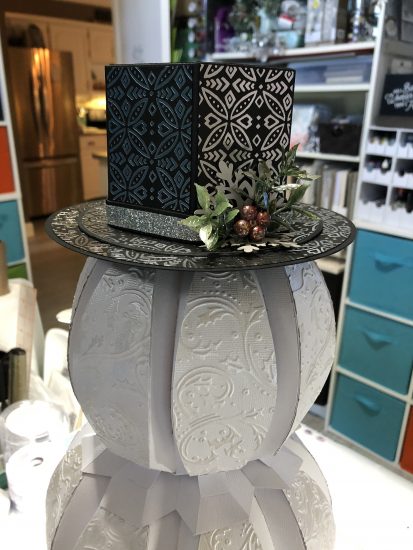 From this point it’s simply a matter of decorations to make your pumpkin as you like it.  Back to the areas between each pumpkin where the small cardstock strips were added.  You can cover these with ribbon or snowflakes as I’ve done. 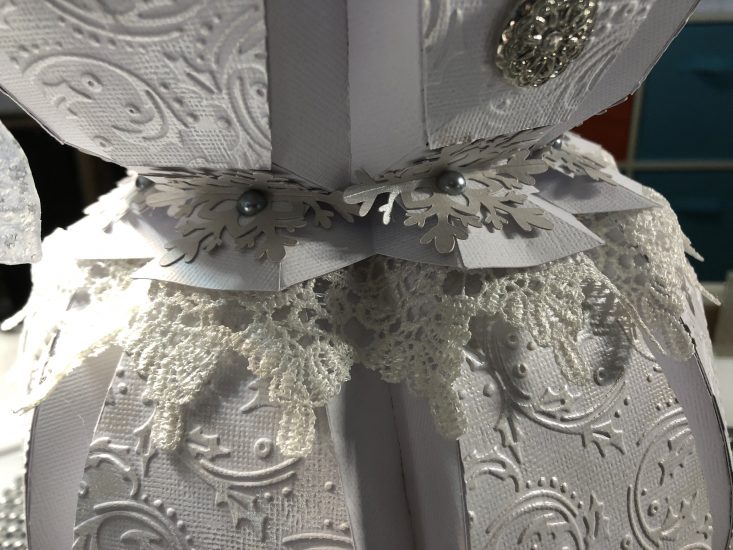 As you can see, I’ve also added some fancy lace trim under the lid sections.  I’ve also used some florals I found to create arms. 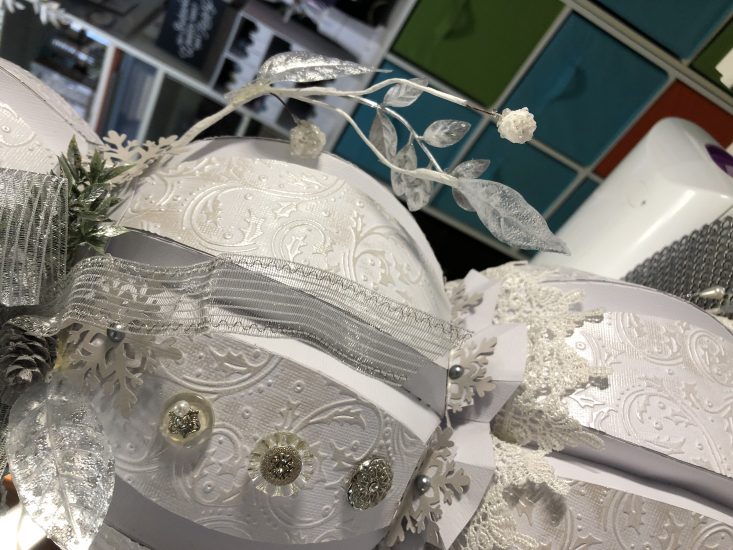 Last but not least, if it’s possible, I plan to add strings of pearls into the recessed areas between the panels.  They are on the way here and it will depend on how difficult it will be to add them at this state lol.

So there you have it!  Hope you are inspired to create your own Snowpkin.